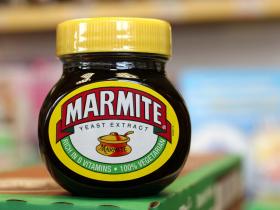 The origins of Marmite and Bovril

One word goes back to Shakespeare’s day; the other is science-fictional

‘How can Bovril be suitable for vegetarians?’ asked my husband. ‘Bo- comes from bos, Latin for an ox.’ He was staring at a label that said: ‘Beef Bovril. Beef flavoured drink.’ This is a preparation of dried granules, containing yeast extract but no beef, which therefore not only suits vegetarians but also counts as halal. I must say I shared my husband’s confusion, for there is still the tarry-looking substance in jars labelled ‘Beef Bovril: the original beef extract’, which is 43 per cent beef stock and 24 per cent yeast extract.

Bovril is made by Unilever, just like Marmite, which caused 24 hours of yeasty frenzy last week when the price was said to have been affected by looming Brexit. Marmite is simply yeast extract, first made in 1902 from by-products of brewing at Burton upon Trent.

The clue to the word marmite is on its label: a cooking pot, in French marmite. The stuff was marketed to enrich soup or stew. But marmite had been used in English since Shakespeare’s day to mean a metal cooking pot with a hook each side to hang over the fire. It was peculiar to Shropshire and the West Midlands. I don’t know why. The pronunciation was marmit. In the 19th century the word was reintroduced from French, with a Frenchified pronunciation, marmeet. In the first world war the word, pronounced in the French way, was given to a bomb or shell shaped like a pot.

Bovril takes us into the wild science-fiction, eugenic, theosophist world of the bestselling author Bulwer Lytton, who introduced the made-up word vril in his novel The Coming Race in 1871. The narrator half explains vril as being like electricity, mesmerism, or the odic force (found streaming from the fingertips, according to Baron Karl von Reichenbach, 1788-1869). Madame Blavastky got very excited by vril.

One more meaning congealed from the notion of Bovril. Bovrilise meant to boil down language like meat concentrate, as in our text-speak, or the Edwardian newspaper small ad: ‘Wanted, Sit. as Comp. by Eng. lady, 35; good Fr.; good refs.’ But this metaphoric use of bovrilise was soon forgotten, as no doubt, too, the Marmite war of 2016 soon will be.

3 thoughts on “Slim of dom”

Your World in Your Hands

Trying to live a creative life

Chef Of Du Cuisine Over The Restaurant

The heavens are telling the glory of God; and the firmament proclaims His handiwork. Psalms 19:1

This is my cool site

ADVANCED BIBLE STUDY! Using the Bible to Understand the Bible!

Coffee in the Rain

God has a plan for your life

Welcome to my world - experiences of a middle-aged Wanderer

View through my window

A unique perspective on Spirituality, Philosophy and Love.

Musings about my travels...

Life is good when you Smile often, Dream Big, Laugh a lot, and realize how blessed you are for what you have!