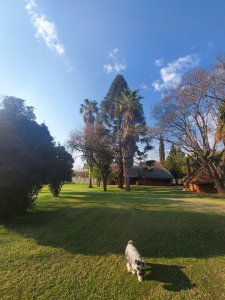 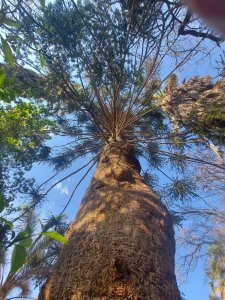 A young boy gifted this monkey puzzle tree to his mother in 1983. Today the giant features in the landscape of the garden on Waterval farm, where I have the privelege of residing. The young man is now middle-aged and his mother frail, their love steadfast as the tree on the family farm.

There are a few things you must know of this giant. When it bears fruit, you do not park or walk in its proximity. (See the photo below) Serious injury and damage is guaranteed! You also tread carefully over sprigs, as they are thorny beyond belief. No place for monkey business in and around the monkey tree. Fortunatley it takes three years to bear fruit.

This morning, my walk in the garden draws me toward the monkey puzzle as it sways in the August-like wind. I hope the rain comes soon. The garden and veld is crying for relief. “Tell my story,” the tree commands. I love responding to such commands.

The monkey puzzle tree is indigenous to the southern parts of Chile and western Argentinia. It is called the Araucaria araucana and also the monkey tail tree, piñonero, pewen or Chilean pine.

This evergreen tree takes years to grow and become giants stretching up to 46 m like one in Stellenbosch. The tree was declared endangered in 2013. Chile has made them natural monuments.

The Monkey puzzle, the hardiest conifer, is also called a living fossil due to a similar species found in ancient prehistory.

If you are a science and maths geek, the unique distinctive branching system of the monkey puzzle follows the Fibonacci series. Go have a look.

The fruit of the monkey puzzle is edible. The cones are from 20 to 22 cm broad and 17 to 19 cm long and the weigh 4.5–7 kg apiece. They take three years to ripen. The seeds are edible, and similar to large pine nuts, and are extensively harvested in Chile. A ceremonial drink, mudai, is brewed from the nuts by the Pehuenche tribe in the Andes. (Their name translates to pine nut people!) It tastes like sweet chestnut, sweetcorn with a hint of pine nut.

Linda Crampton and The Urban Huntress have written extensively on the tree and its edible fruit. Go read! 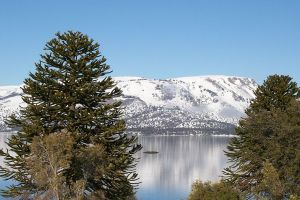 I will never just look at the monkey puzzle as a tall giant in the garden again. I will revere its prehistoric nature, its ability to survive standing tall, far away from where it belongs and also a source of food. A provider, a survivor and a monument to a boys’ love for his mother.

16 thoughts on “Monkey puzzle in the garden”

The world around through my camera's lens

An insight to a heart mind and soul.

Experience your identity and calling through true events

My Black and White World

Everything is Black and White